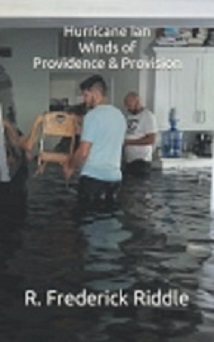 As the author of Hurricane In Winds of Providence & Provision, I want to share the excitement that it brought me.

When Hurricane Ian struck there was widespread damage done. My wife and I had evacuated and were without WiFi for awhile. It was during this time that the events in this book took place.

The story, which is told in the words of several members of the Sheppard family, began with simple preparation for extremely high winds and surge. Pastor Jay Sheppard felt that he and his family had prepared their home for the expected surge as they lived next to the Peace River. But they did not know they would be facing a flash flood!

After the Lord laid it on my heart to write this book, I contacted Pastor Jay, who is my pastor, and told him of the burden. He suggested an idea I was already entertaining. Namely, that I get him and his family members to tell the story in their own words! It took persistence on my part to get those stories included in the book and to arrange them in a manner that made sense, but it was worth it.

Hurricane Ian Winds of Providence & Provision is the culmination of those efforts. I purposely only did light editing as I wanted each contributor’s voice to come through. The result is a book where the reader hears from each contributor and can identify with them. I know I am biased, but I believe this is a timely book showing God’s love and providence, and belongs in many personal libraries or bookshelves.

Right now it is in print form only but will soon be in eBook as well.